What the Piggy Taught Us By His Life – Gratitude 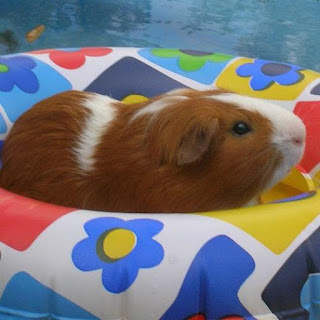 In the early days after George joined our family, I decided to experiment with him a little bit.  No, not that kind of experiment.  In fact, becoming a proud owner of an adorable guinea pig drastically redefined my casual use of the word ‘guinea-pig’ which, in my mind, always implied the disposable aspect of the species in the service of higher goals of medical science and advancement of human race.  Once a rodent becomes your pet, it’s rather offensive to see it as an experimental animal, but I am getting off subject….

Back then, a thought crossed my mind that guinea pigs might be trained to say ‘thank you’.  Perhaps not in the form and vocalization of the English or even Serbian language, but in a language widely known among rodents as Guineapiggish.  So, every time I gave George food, I also patted his back and asked him,

What do you say, George?  What do you sa-aay? in a sing-songy kind of voice. The kids started doing the same. Soon enough he begun responding with a loud brrrrr-brrrrr sound, which translated into English means thank you. This delighted us to no end and gave us special bragging rights. George became our Grateful Piggy.

It turns out training piggy to say ‘thank you’ is much easier than training humans to do the same. Of course, we already know that everything is much more complicated with humans, especially since I am not talking about the manners type of ‘thank you’ here (not that there is anything wrong with them).  But it is quite possible to have perfect manners and still whine and complain, grumble and blame. God’s Word, however, is unambiguous about this – God’s children are to give thanks in everything!

I understand that this is a sore topic in the world ridden with unbearable pain of loss, unspeakable evil, gross injustices and unfathomable atrocities committed every day, often by those entrusted with power and authority to use it for good rather than evil.  How do I thank God for this abuse? For this betrayal? For the broken heart? For shattered life?

God certainly doesn’t expect me to sugarcoat it.  David didn’t sugarcoat it.  Prophets didn’t sugarcoat it.  In fact, in their writings we see God’s own raw emotions in response to the evil acts of His own children. He hurts when we hurt – ourselves or others; because of our own or other people’s sin. If anybody knows about unjust suffering, it is Jesus. We must be careful not to trivialize pain by thoughtless spiritual platitudes.

This still doesn’t give me the answer to giving thanks in everything.  I would much rather anesthetize my pain with a box of Pringles. But I also found that I can actually enter it. I can step into it armed with a purpose to patiently endure it, entrusting my mind and heart, soul and strength to the God who is bigger than my pain.  Who promised that He will one day put a complete end to it.  Who promised that He would use it for His good purposes. Sometimes, those are the only two hooks I can hang my faith on and choose gratitude.

After you have suffered for a little while, the God of all grace, who called you to His eternal glory in Christ, will Himself perfect, confirm, strengthen and establish you. I Peter 5:10